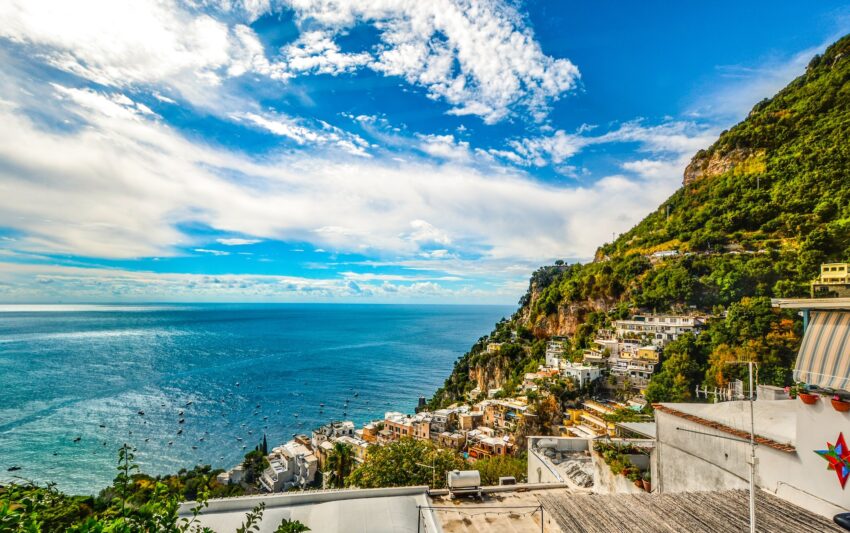 Behind us, the tall, good-looking Italian with arms waving, in what appeared to be a language of its own, yelled loudly over us to another man in front of us. They were both impeccably dressed yet seemed comfortable. They continued shouting and gesticulating back and forth to one another. Not in an angry way, but good-humored and emotional. This apparent freedom of expressing oneself resonated within me. My career, as a businessperson before retirement, was spent being proper, serious, and composed. This outburst enthralled me. How amazing to be so open in a very public space. As we continued our stroll down the streets of Sorrento,  I began noticing that this exuberance was not the exception but the norm in Italy. I felt my heart warm. I was one day in this country and already felt a kinship. I had a sense of belonging. Or was it a longing to be part of this culture? I quickly reached for my phone and sent a text to my sister—the family genealogist.

“Is there any Italian blood in our family lineage?” I so wanted this to be true. Surely this was why my heart had longed to be here.

“No,” She quickly responded.

“Are you sure? Because I’m fairly certain that I have just found my people!”

Forty-three years as a tax accountant and financial adviser ended in December 2018. Finally, retirement. My heart had ached to travel and experience the world during most of those work-filled years. My husband and I, partners in life and business, had taken various trips. However, they seemed always to be combined with professional continuing education courses or conferences. Don’t get me wrong. We were able to go to some pretty wonderful places. But now, at last, we could explore without time constraints to places we desired.

Italy had always been number one on my bucket list. Something about the country had always intrigued me. Was it the people, the history, the romantic movies I had seen, or pictures of rolling vineyards or brightly colored houses along the cliffs that had called to me? I had to discover the answer. My husband didn’t think I could pull off an itinerary quickly. However, in May of 2019, we boarded a plane to Italy.

To say that this first major trip to begin retirement was noteworthy or memorable would somehow trivialize the overwhelming impact it had on my life.

Traveling seems to cause all five senses to be heightened. Sounds, flavors, aromas—all take center stage.

The sounds of the Italian language filling the stores and streets was simply music to my ears. There is just something in the lyrical cadence that makes me smile. As I attempted to repeat phrases back people I met, it brought smiles to the Italians’ faces. The people we met were eager to learn English and were visibly delighted to participate in our efforts to learn theirs. What a privilege to connect with others through language even though there was a lack of complete mastery.

And why did pasta dishes taste and smell so much richer? Was it the fresh ingredients used from local sources? Or the lingering over a meal to fully appreciate the flavor profiles? In small, family-owned restaurants, having the “catch of the day” was literally what father and son had brought in from the fishing trip earlier that same day—not simply an item pulled from the freezer. The limoncello made from the immense lemons right on the grounds with their intense aroma was addictive. Even lemonade made from these lemons was distinctive. Italian wines and cheeses differed from any we had tried.

Enjoying a glass of wine and watching people pass by the piazzas opened our eyes to the lack of a frantic pace in the Italian lifestyle along the Amalfi Coast—let me just say this is a distinction I could easily adopt. No one gulping down a burger on their way back to work or urgently bustling from one place to another. Many shop owners even close for a few hours at lunchtime to rest and relax.

Travel also often brings us up close to cultural differences. As the roads are often narrow and parking is limited, many choose to walk. This leads to a slower pace and different manner in carrying out various rituals as well. In Capri, down one of the narrow, cobblestoned byways, we were busy talking to our guide when a “SHHHH” rang out. Everyone stopped suddenly. All became quiet as a funeral procession passed by—the casket being carried by a few of the mourners. Another time we were being driven from one city to another through small towns. We had to stop and slowly follow mourners as they left the funeral at the church and walked in the street to the cemetery. This regard for the passing of time and the passing of life was refreshing and inspiring.

The last night of our trip, we were at the Monastero Santa Rosa—an old monastery refurbished into an intimate spa. The restaurant on site was unsurpassed. Over the few days we were there, we often spoke to one particular server—a man in his 30’s or 40’s and the epitome of Italian service. Each meal, he greeted me with “Madame” and a smile—as if he had waited all day to introduce us to what was on the menu that day. The last night over dinner, as he made recommendations and served us, we exchanged thoughts on what made Italians so uniquely special. I was still attempting to find the answer to the appeal of Italy. I expressed to him that I felt it was their honest love and care of others above self as seen in their regard for service, family, and tradition. His big brown eyes met mine, locked for a moment, and he smiled in acknowledgment and gratitude. In that instant, a connection was made. What a beautiful moment of sharing our appreciation for another’s culture.

The trip’s effects have stayed with me, as has the impact of other trips we have enjoyed since that first one. Travel has taught me to plan, to research, and to organize, indeed. But more importantly, it has invited me to employ all my senses in new environments and engage people wherever I meet them and to openly celebrate their cultural differences. My life is richer for it, and I look forward to each new trip with great anticipation.

Postscript: And I am still pretty sure that my sister missed something in our family genealogy—there must be Italian blood in there somewhere.