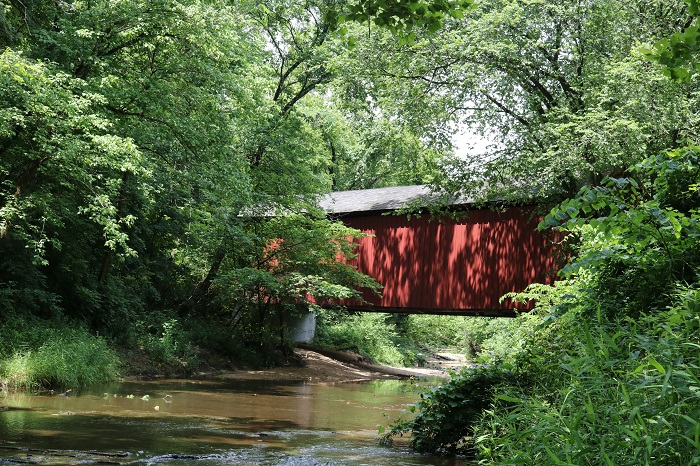 What is it about covered bridges? They hold some kind of romantic appeal to us, don’t they? After all, they are called “kissing bridges.”

They make us think back to more simple times. Yet, these historic structures are anything but simple in their construction.

The Howe-truss system was named for its designer, William Howe. Wrought iron rods are used to supply a vertical brace, while the timber provides the diagonal. This design was not only used in covered bridges, but it was popular in railroad design as the construction was speedy, and the rods could be tightened to remove sagging.

The Burr-arch truss was created by Theodore Burr, who became known as the “Father of American bridge-building.” This design utilizes a series of king posts which enables the bridge to be longer. Then adds an arch to support the truss. The Union Covered Bridge in Missouri is an excellent example of this.

But what was the reason that these structures were covered to begin with? Pretty much for practical purposes—it prevented the decay of the wooden bridge it covered. An uncovered wooden bridge could be expected to have a life span of only 10 years before needing extensive repair. By covering, the length of time could be significantly increased. As one noted, bridges were covered for the same reason a woman wore petticoats—”to protect their underpinnings.” The covering also provided a more comfortable crossing for animals and an excellent emergency shelter for travelers.

Many of the covered bridges were “toll” bridges owned by individuals. And with no regulation, the owner could charge any amount they felt they could get by with. Most excepted churchgoers on Sundays and doctors crossing to go to the hospital or to see patients. At one time in Missouri, there were a total of 30 covered bridges. Now, sadly, only four remain. So my husband and I decided to take a step back in time and visit these quaint, romantic structures.

We began our trip in the northwest corner of the state. After a refreshing night at the Inn on Crescent Lake in Excelsior Springs, MO, we took a short one-and-a-half-hour drive to Locust Creek Covered Bridge. It is located not far off Highway 36 near Laclede, MO. Be prepared to travel along a gravel road for a bit.

Once you park, take the easy .25-mile mostly gravel trail to the bridge. The path is not paved, and if it has been raining, you might consider wearing rain boots as it will be pretty muddy. The bridge once crossed the Locust Creek but now spans a dry, empty creek bed. Through its lifespan, the floodwaters would deposit soil, and eventually, the covered bridge sat on the land. In 1967 the Missouri legislature authorized the state’s Park Board to repair the bridge. In 1991, the bridge was raised by 6 feet to prevent rot due to the damp ground.

The sloped entryway beckoned us into the interior. Inside was a great example of the Howe-truss system. The white pine lumber used back in 1868 to build the bridge still looked quite sturdy. And we noted that at 151 feet, this was the longest of Missouri’s remaining covered bridges. We had read different posts about the vast amounts of bats inside this bridge, but we did not witness any the day we were there.

There are information boards near the bridge which tell this bridge’s history and construction.

We continued our Missouri covered bridge journey by traveling east on Highway 36, then south on Highway 15 until Highway 24. It’s only a short hour and a half drive from the Locust Creek Covered Bridge to the Union Covered Bridge.

This bridge sits very close to where you can park and is a lovely, peaceful place to spend some time. This old beauty was built in 1871 to enable travelers to cross the Elk Fork of the Salt River. The white siding creates a most picturesque appearance. The horizontal slats make it appear to be a house—not like the more barn-like vertical slats on other bridges.

Inside, the Burr-arches are an amazing design. This bridge is the only one remaining in Missouri to use it. There are two arches used in this bridge to cover its 120-foot span. The native oak used is very durable and obviously easy to work with, given the curved utilization.

We stopped for a night at Hermann, MO to stay at a beautiful and historic bed and breakfast,  The Inn at Hermannhof. We chose one of the hillside cottages which overlook the town of Hermann. Through the double doors, we stepped into a beautiful stone-floor room complete with king bed and fireplace. We highly recommend this as an overnight stay. While you are in Hermann, spend some time at the Hermann Farm and Museum, the Stone Hill Winery, or the many other wineries in the area.

A quick, scenic one-and-a-half-hour drive from Hermann brought us to the Sandy Creek Covered Bridge. The immediate reaction is that this bridge looks like an old red barn. It was constructed in 1872 after the Civil War. It crosses Sandy Creek and is only 74 ½ feet in length. Sadly in 1886, a flood completely destroyed the bridge. But it was rebuilt that same year.

Once again, the Howe-truss design was utilized in its construction.

The area surrounding the bridge is peaceful and even provides a picnic area. It would accommodate photographers or painters with an excellent subject to capture.

We traveled another hour and a half southeast and came to the Burfordville Covered Bridge. The east pier boasts a date of 1860, yet that is only when construction began. Unfortunately, the Civil War broke out, and therefore the bridge was not completed until 1867. It was an essential part of the area as it served farmers bringing their grains to the Bollinger Mill nearby.

Yellow poplar was used to build this 140-foot Howe-truss bridge. It still has the timber slats going across the bridge, which assisted in traffic crossing the Whitewater River below.

Most notably, this bridge sits next to the Burfordville Mill. The sizeable four-story mill also dates back to the Civil War era. The park setting, the rustic mill, and the covered bridge serve to take us back in time. In addition, they provide fabulous opportunities to photograph and paint.

Note: When we were there in September 2021, there was quite a bit of reconstruction going on at that time.

I had read many stories about these relics of our past, and, of course, who hasn’t seen The Bridges of Madison County? But to visit the old, covered bridges, to breath in the smell of the wood, and to hear the creaking wood beneath your feet as you walk through them is so much better.  It is a trip worth making.

There are articles which state that you could see all four bridges in one day—and you certainly could. But I am thankful that we took several days and enjoyed the leisurely scenic drive to each destination and the other stops we made. Missouri is a beautiful state with many things to explore. I’ll be back!

Have you visited covered bridges? Where were they and what lasting impressions did they leave?